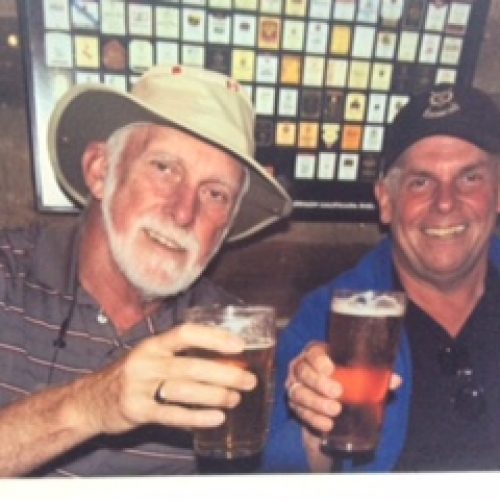 David died peacefully in Hospice after a long and turbulent bout with cancer. He was a kind, caring. compassionate man, loved by everyone who knew him, and will be remembered for his gentle ways, his wicked sense of humour and his love of life. Despite the many challenges he encountered throughout his devastating illness, he retained his sense of dignity and faced each day with an optimistic outlook. At the end of each of our visits,  he would always say, “I will be here tomorrow.”

His motto was, “Whatever it Takes” as he went through each of the many treatments at the Cancer Centre, hoping that they would put the disease at bay.


One of the highlights of David’s life was visiting Scotland with his brother Dan. They lifted many a glass of good Scottish ale to toast their father’s homeland.

David  leaves to mourn him, his beloved wife Elizabeth, son Glenn, wife Nicole, and their sons, Nicholas, Sam, and Daniel, daughter Megan, husband Steve and their sons Ben, Jordan and Logan, his brother Dan and wife Peggy and their son Ian, plus a large extended family.

David was known as The Gentle Giant. A big guy with a huge and loving presence. We will hold him in our hearts forever.

Those wishing to do so, may make a donation to Victoria Hospice in David’s memory.