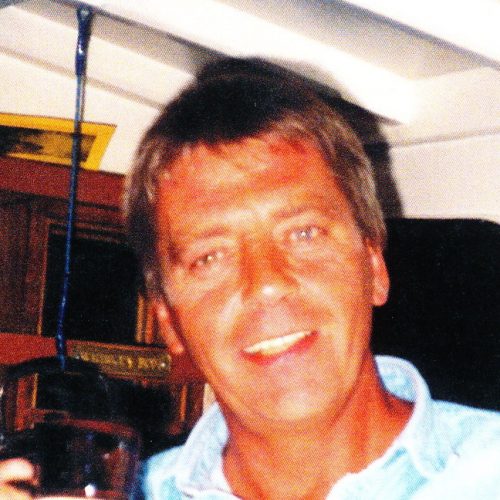 Welcome everyone. We are going to take you on a short stroll down memory lane in the life of Pal Hal.

We will not go into the past history of where he was born etc.,etc..

This will be some highlights of Hals life.

Hal has four fabulous children and four grandchildren and the love of his life his wife Judy. A roller coaster ride of 42 years. Hal has two sisters and a brother that passed away seven years ago.

As reference was made to Hals hobbies, there were a lot. Some bigger than others. Hal rode a motorcycle and lived and worked from Palm Springs to Vancouver. He was a self-taught bartender. This profession was a great love of Hals. Why wouldn’t he love it? Holidays were for travel to Mexico, Thailand, Hawaii, Palm Springs, Phoenix and British Honduras. Working in between holidays at a variety of jobs.

The big adventure was building and operating a commercial fish boat. In this too he was self-taught. YIKES. After the bank took the fish boat, Hal went to work for Canada Post. He worked at Canada Post for 25 years. Once again his hobbies were not as grand as the fish boat but he did a variety of entrepreneurial endeavors. Just to list a few there was stain glass windows, tennis racket stringing, picture framing, motor bike riding, playing golf, rebuilding the house and once again owning a small sail boat. Hal was destined to own a boat. He loving being out on the water and being free.

In the past 10 years golf was Hals passion and he was a member of Cedar Hill Golf Course. He played with his wife and his many friends and was a very good player but never took it too seriously. While in Phoenix Hall and his sister had a hole in one, two days apart. Amazing.

When Hal retired from Canada Post he had survived several health issues. Then more health issues came to light. Some that would put anyone else down for the count…but not Hal. The family would refer to Hal as the energized Bunny who just kept on going. Hal could overcome anything and he did but not this time. Age and the severity of the disease did him in.

Hal was anything but ordinary. He was a shooting star. Very Big and Very Bright. He will truly be missed and remembered with love.

A private celebration of life will be held at a later date.