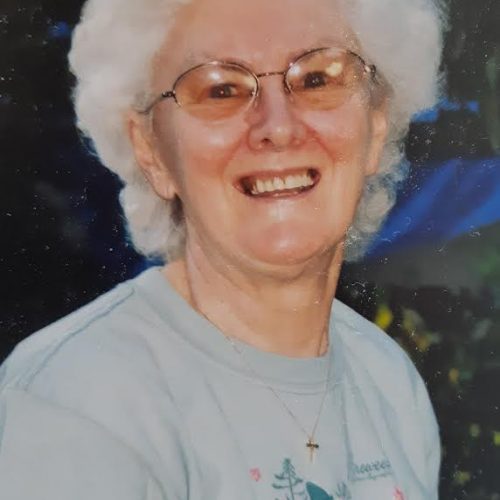 Maureen Amy Wright (nee Blakemore) has been called home to be with her Lord. She passed
peacefully in her sleep early morning on January 28, 2021 with her daughter Margaret by her
side, at the Priory Nursing Home in Langford, BC. She was 90 years old.
Maureen was born in Bridgnorth, England to William Frederick Blakemore and Hylda Annie
Beaman. She grew up with her sister Pam and extended family of 6 aunts, 1 uncle and many
cousins. Both sisters were inspired by their mother to join a local theatrical drama group in
their hometown, where Maureen enjoyed acting and prompting. She also learned and enjoyed
playing the piano and going to dances. Maureen enjoyed the green English countryside, and she
would join her father in his country garden, where she developed her lifelong love of gardening
and bird-watching. Her love of gardening led her to study at the Wirral Horticultural College,
UK. Maureen travelled across Europe with her sister and spent a summer working in Denmark
in the gardens.
Maureen met Trevor Wright at the Nurse&#39;s Christian Fellowship in 1954 in London, UK and has a
very strong Christian faith. Their romance was put on hold when Trevor moved to Saskatoon,
Sask. to study theology and was rekindled in 1959 when he returned to London to meet with
Maureen and they attended a Night at the Proms. Trevor returned to Canada and continued his
seven-year letter writing campaign to win her heart concluded on August 10, 1961 when they
got married in Saskatoon.
Maureen spent her early married life raising two children Margaret and Robert alongside
attending to the church events and duties of a pastor’s wife. She divided her time leading
women’s prayer and bible study groups(a lifelong dedication), gardening in her beloved
greenhouse, organizing family holidays, and locating lost teddy bears in rhubarb patches.
Maureen and her children followed her husband’s pastoral calling that took the family to
several parishes that included Kenora,Ont; Kitscoty and Edmonton, AB; Lincoln, UK; Swan River,
MB; and Prince Albert, Sask. While in England Maureen made many family sea-side and English
countryside holidays happen. This happened in all parts of the country, including Devon
(southwest) Wales (west), York (northeast) and Hastings (southeast).
Maureen faithfully followed her husband from parish to parish, so upon retirement, it was now
his turn to follow her to her ideal retirement place in Victoria, BC. Here she could be close to
her beloved ocean, year-round gardening, and country scenery. And it wasn’t freezing. Her
favourite places were the Butchart gardens, Hatley castle grounds, and nature walks in the
countryside especially the Esquimalt lagoon, where she could see many species of birds,
including herons and swans; the ocean, and the Olympus mountains.
In Victoria there were many happy visits from grandchildren and Maureen got to take them to
the beach or to play her favourite game of Yahtzee. She enjoyed many country drives and wine
sipping trips with her son and in-laws to visit cideries and vineyards at Sidney and the Cowichan
Valley. Maureen travelled once again with her sister on a Rocky Mountaineer train excursion

and on a cruise trip to Alaska. She also travelled with her husband and friends across the Rocky
Mountains in both Canada and the US, taking photographs and spotting many birds.
Maureen was well known as the family historian and journalist. She documented every family
gathering or holiday with an extensive photo journal and she leaves the family a large photo
library to keep her family’s memories alive. We love you Mum and you will always be alive in
our memory.
She leaves to mourn her devoted and loving husband Trevor Wright; children Margaret(Dennis)
and Robert(Audra); and grandchildren Luke de Wolf(Sarah) and Hannah de Wolf(Nathan);
brother-in-law Laurence Swadling alongside nephews, nieces, and her many cousins. She is
predeceased by her parents and her sister Pamela Swadling.
Care and affection.
Thank you to the staff at the Priory Nursing Home for their wonderful care of Maureen over the
last 3 1/2 years (and Bun-Buns the bunny thanks you).

Funeral will take place through Zoom on Friday February 5, 2021 and to attend contact
Margaret at margieruth70@gmail.com for details.
In lieu of flowers, donations may be directed to The Primate’s World Relief and Development
Fund, an organization close to Maureen’s heart or the Alzheimer Society of Canada or an
Alzheimer Society of your choice.
The Wild Rose
Five pointed sepals with a pearly sheen
Uphold the frail cup’s curved transparency,
White-veined below, and flushing tenderly
Towards the brim. A shadow lies between
Each loose-curved petal, and the scent-so keen,
So sweet-is very wine of joy to me.
The humming honey-people eagerly
Enjoy this loving-cup among the green.
We share together, the butterfly, the bee
And I, and the little beetles that gleam and shine.
And yet one more, my spirit whisperingly
Has spoken of, whose banquet is divine.
Deep down within the chalice I can see
The gold He left there as His kingly fee.
From ‘Poems and the Spring of Joy’ by Mary Webb.