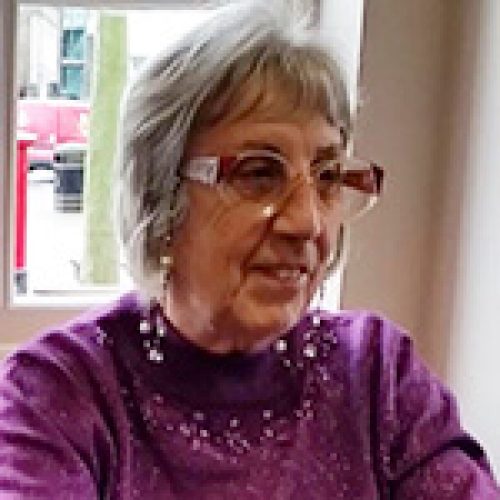 Agnes was born in Bellshill, Lanarkshire Scotland to John King and Agnes Houston King.  The youngest of five children who lived into adulthood, she was christened Agnes but was known to friends and family as Nan.

Married to George Carlin McClintock in February 1956 and divorced in June 1962, her first job was in a local office where she learned the secretarial skills that would later help her secure a job in the Canadian Government Offices.  However before immigrating to Canada her sense of adventure took her first to Skegness, in England, where she had a great time as a Butlins resort Redcoat.

Nan settled in Toronto where she had a small family circle of four cousins and made many friends.

Nan became a Canadian Citizen in December 1975 and always professed great love and admiration for her adopted country. “I’m a Canadian now” was a phrase her family heard on many occasions.

During a vacation to the Westcoast of Canada, she fell in love with Victoria BC, so, when several of her Toronto friends passed away, she moved to Victoria.

In Victoria Nan spent a lot of time as a volunteer with many organizations helping those less fortunate than herself, and was active with senior’s groups and with the Royal Canadian Legion.

A longtime active member of The Church of Jesus Christ of Latter-day Saints, Nan was always ready to share her faith, beliefs and testimony with everyone she met. Nan had a soft spot in her heart for all the young church missionaries serving so far from home and fed them many a meal.

Nan braved the long journey to the U.K. in December 2015 and spent a very happy Christmas with family in England and then in Scotland, where she saw the New Year in with great company. They are all grateful to have shared this happy time with her.

She had a heart of gold, was one of a kind and we will all miss her.

A Celebration of Life will be held in honour of Agnes at 1:00 p.m. on Saturday, February 11 at the Quadra Chapel of The Church of Jesus Christ of Latter-day Saints, 2990 Quadra Street, Victoria, BC. Everyone is welcome to attend, and light refreshments will follow the celebration. If you are unable to attend and wish to send cards of condolences that can be passed along to her family, please mail them c/o CARE Funeral Services, 2676 Wilfert Rd, Victoria, BC, V9B 5Z3

Agnes requested cremation, and in lieu of flowers being sent to the Quadra Chapel, perhaps you might chose to make a donation in her name to Our Place Society where she volunteered, 919 Pandora Ave, Victoria, BC V8V 3N4 or to the charity of your choice.