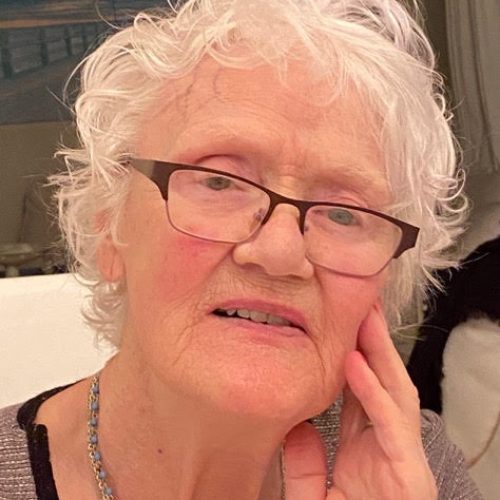 It is with sadness that we say goodbye to CATHERINE BROWN (McTaggart), who passed on June 12, 2021 about 4AM in Sooke, BC, Canada. Catherine (Cathie, Mum) fought a battle with lung cancer, with vigor and resistance, her family by her side.

Catherine is predeceased by her beloved spouse Teodor Bodor (Ted), her mother Catherine McTaggart (Katie), her father Patrick McTaggart , her sister Anne Skelly (Mctaggart), her brother Patrick McTaggart, and her cherished granddaughter Makayla Curtis, who died ever too soon and left a gaping whole in Mum’s heart. Catherine is survived by three children: Carol Brown of Sooke, BC, Ronald Brown (Ronnie/Tracy) of Dallas Texas, and Joyce Brown of Victoria BC. She is also survived by three grandchildren: Monika, Samuel, and Miranda, as well as her brother Joe (Elsie), sister Mary and sister Betty (James), and many nieces and nephews sprinkled over Ontario, Edmonton, and Scotland.

Mum was born and raised in Glasgow Scotland. At 17, she worked at a pawnshop in Maryhill, Glasgow, where she met her husband (our dad), Ronald Brown, and married him in August, 1957. She bore three children, and with ambition and an adventurous nature, we immigrated to Canada a few times, the last of which was in 1972. Mum and dad separated, but we are most grateful for their union and its fruit! Mum met Ted (her Teddy Bear) in 1986, and was with him until his death in 2009. She found solace with him, after a time that was tumultuous for her. He grounded her. She had adventures living in: Windsor, ONT; Lethbridge, ALTA; Toronto, Hamilton and Burlington, ONT; Kelowna, BC, and Sooke, BC. When she was still healthy to travel, she visited Scotland almost every year, and pined over her sisters longingly, as they were great friends. Until her dying breath, she has missed her sister Anne profoundly, as they were “pals” since they were teenagers.

Mum was creative and artistic. Her high school art teacher had one of Mum’s drawings hanging in the Glasgow Art Gallery. She taught her daughters how to knit, crotchet, and sew. Mum loved crafts and flower arranging (she had a job as a florist for a while). Her creativity showed up in her love of fashion and jewelry.  Until the bitter end, she got up, dressed up, and showed up, every single day. She loved old musical movies, and when there was something to say, she often had a line in a song from one of those great movies that she would sing, in response. While battling an uncomfortable disease, she did jigsaw puzzles, played Yahtzee, and found solace watching Grace and Frankie, on Netflix! She loved their spunk and their humor, probably because Mum was spunky and humorous.

In her final years, with her health declining, mum had support from family in Kelowna. This last year she moved to Sooke, spending most of that time living with family. In her final weeks, Mum stayed at the Ayre Manor Care Home (Sooke), and we are eternally grateful for their kindness and support to make Mum comfortable until she passed.

Her favorite actress was Doris Day. Que sera, sera, Mum. May you rest in peace.

Mum has now been cremated. A celebration of her life is planned for October 19, 2021, at 10AM Pacific Time and will be a live/virtual event, due to COVID. The location will be at Sands Funeral Chapel, 317 Goldstream Ave, Victoria, BC.