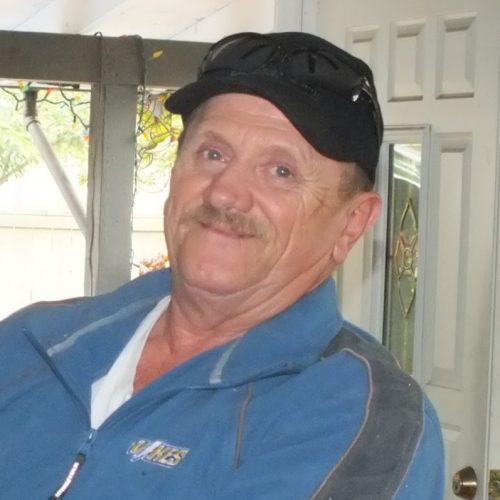 It is with great sadness that we announce the passing of Vic in the early morning
of January 27, 2021.
Vic was a character to say the least. Most people know he didn’t care much about
money but he did care about people and doing things for people. Vic was a
roofer, a siding installer, a sheet metal worker (eaves, downspouts and flashings)
a carpenter, a floor layer, computer tech and sometimes mechanic. Whatever was
needed Vic loved to help. He would do whatever he could for family and friends.
Even if you were a customer of his, you were also his friend.
Vic is survived by his mother, Gertrude (Gert) and his six brothers and sisters, Geri
(Shan), Bruce, Lori, Matt, Connie and Geoff (Lindsay). His father Charles (Chuck)
passed away when Vic was just 15.
Vic loved to drive and was damn good at it. He had many vehicles, most of them
always loaded with the tools of his trade. He also took great delight in scaring the
daylights out of any innocent nervous passengers.
Whatever Vic did he was good at it – he was smart and talented. Vic was well
known for his talents in darts, playing for the Canadian Legion Local 91 on two
teams in Victoria. He represented our district at B.C. and Canadian Senior Games
competitions all across Canada, winning many trophies and medals, gold several
times, in individual and team events. He was also very talented at golf,
pool/billiards, and horseshoes, winning the O’Hara Annual Horseshoe
Tournament several times.
When Vic was young, he was a bit of a bugger, getting into lots of trouble, while
very much enjoying his life. As he grew up, he made up for his mistakes by helping
whoever he came across that needed help. For the last 11 years he has lived with
and cared for his mom as she has aged, making sure she was content. A good son.
Vic cared deeply for his nieces and nephews, Jeremy, Ryan, Michael, Sara (James),
Maryna, Martin, Marcus and Keoni, as well as his great-nieces and great-
nephews, Shannie, Ocean, Kaiden, Kessa and Kensie. Vic had a special bond with Kaiden. He did his best to spend time with and enjoy all his relatives. He loved kids and they loved him.
A special note: The Family wishes to thank Vic’s neighbour and friend Kyle Ilett,
Jordyn and their 7 year old daughter, Nylah. Kyle selflessly cared for Vic as he
became ill and was unable to care for himself. Kyle was there for Vic and showed
passion for his friend above and beyond as his final hours neared. Little Nylah
loved to talk to Vic and I know he loved her company, especially in his final days.

Due to Covid there will be no celebration of Vic’s life until it is safe to gather again.