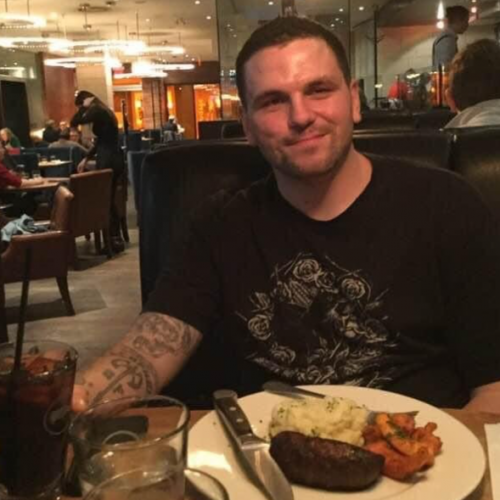 “ HE WILL COVER YOU WITH HIS FEATHERS, AND UNDER HIS WINGS YOU WILL FIND REFUGE” PSALMS 91

(Billy) William Clayton Bradshaw was recently one of the victims of a double homicide that took place in Saanich, Victoria, British Columbia on October 19th, 2022. Billy’s death is still under investigation.

Our special memories of Billy are how he always enjoyed helping others, and did so with a smile on his face. He never really had a chance to spend much time with his family in Alberta and struggled with addictions since the age of 14. He spent most of his adult life incarcerated, and eventually became institutionalised (no longer able to function outside of jail). His family tried many times to get him the help he needed, but timing was never on his side.

Billy enjoyed singing and playing guitar; he was an artist in many ways. He enjoyed drawing, as well as tattoo artistry. As a child Billy enjoyed fishing, camping, and Boy Scouts in Leslieville, Alberta. He also enjoyed skateboarding, Dungeon and Dragons, and listening to music. As a child Billy was adored by all of his grandparents but was especially adored by his great grandmother Alice Bradshaw who is also greeting him in Heaven.

A memorial will be held on Saturday, November 12th at Billy’s sister’s home in Rocky Mountain House, Alberta. In lieu of flowers, donations can be made to Red Deer’s Dream Centre, a faith based addictions treatment centre.

ISAIAH 61-3 Reads “ TO ALL WHO MOURN IN ISRAEL HE WILL GIVE: Beauty for Ashes, Joy instead of Mourning, Praise instead of Heaviness”.